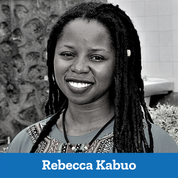 Rebecca Kabuo was born 25 years ago in Goma in the eastern Democratic Republic of Congo (DRC). She grew up in a context of poverty and war and, at the age of 19, she decided to resist and fight for positive change in her country. She joined LUCHA, an acronym which stands for Lutte pour le Changement (Fight for Change), a non-violent movement created in the DR Congo in May 2012 to raise awareness of the people’s rights and duties and to take citizen action to demand greater transparency, security and sound governance to those in public office. Kabuo has co-organized more than 150 peaceful protests to demand from the political and administrative authorities access to clean water, paved roads, free education, to improve the living conditions of the population, and to end a war responsible for the massacre of more than a million people and the rape of over 200,000 thousand women. Today, she is the coordinator of a non-profit she created after her incarceration, TENDO, which works with prisoners, especially women.